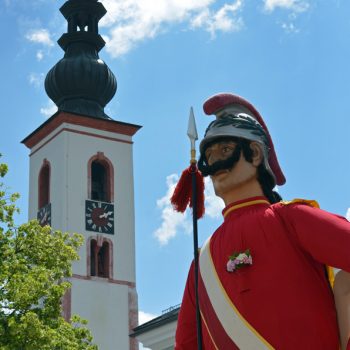 The Samson figure has been historically documented in the Lungau since 1635 and
symbolizes an Old Testament figure with superhuman strength, a strength seated in
this long hair. Samson is as much as 5.0 m tall and weighs around 75 kg and is carried
by one person. Many myths, legends and assumptions are interwoven with this giant
figure from the Lungau. Nowadays the Samson is still carried in a celebratory procession
through the town on certain days. It truly is an imposing sight as Samson, accompanied
by the town band, is moved with dignity through the village streets, venturing a short
dance every now and then, with the two dwarves swirling around him.